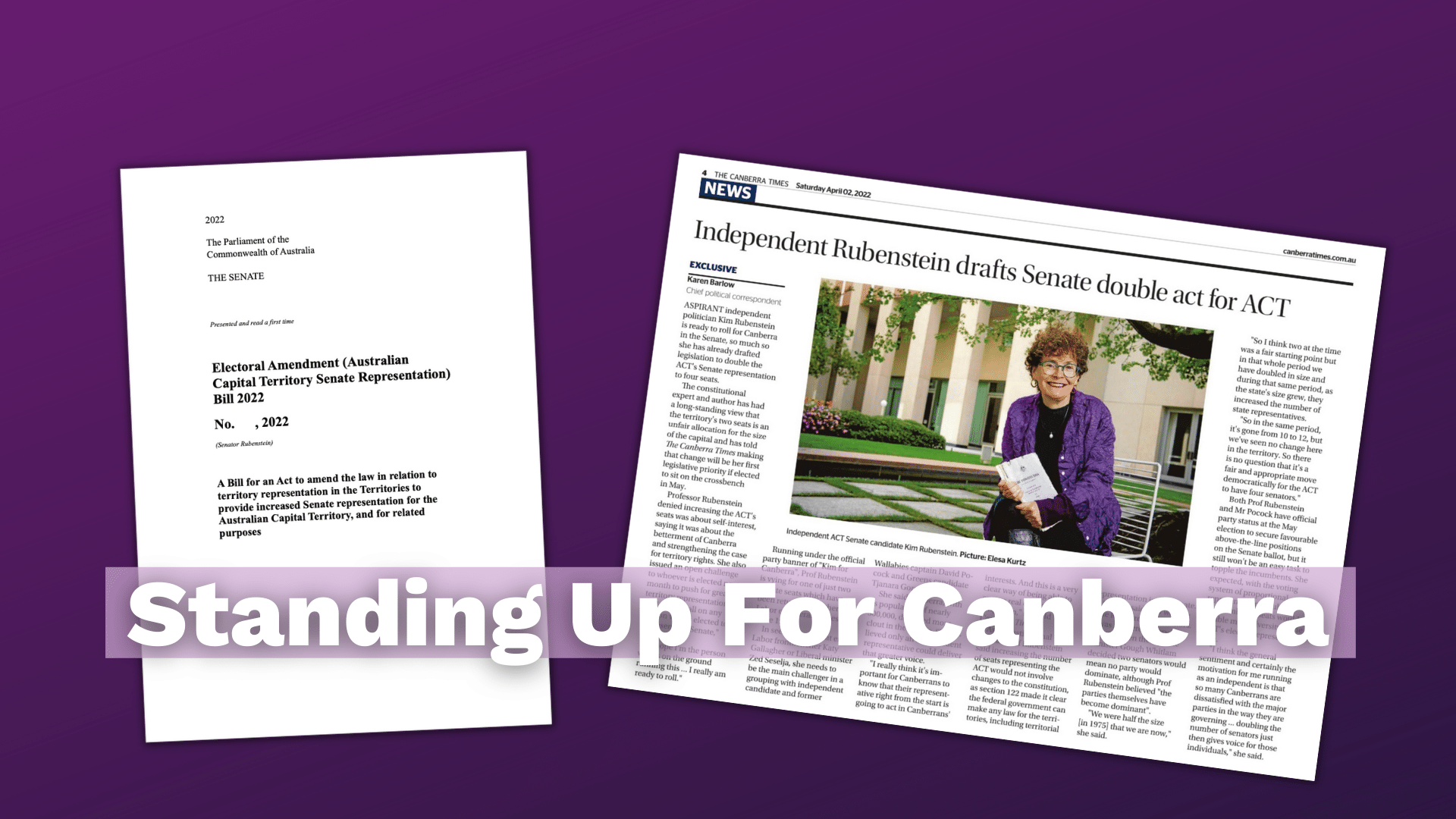 Standing Up for Canberra

The voices of the people are at the epicentre of our democracy, and the major parties over time have increasingly muffled and muted this voice. I want to directly represent Canberra in the Senate, so that politics can once again be a collaborative process. By having an Independent in the Senate, we can bring Canberrans voices directly into Parliament — not requiring approval by the major parties. I want ensure that Canberrans’ needs, not the parties’ needs, are put first - something current ACT Senators cannot guarantee.

The ACT is clearly entitled to two more Senators. Its population has more than doubled since it first received Senate representation in 1975. Since 1975, each State has increased its representation by two Senators as a result of population growth — but not the ACT.

The imbalance between the ACT and the States is growing to the point of absurdity. Look at Tasmania with a population of around 530,000 — it has twelve Senators. But the ACT with a population of around 450,000 only has two. The disparity of representation between two similarly sized populations makes the case starkly. My draft legislation would immediately  boost the ACT’s Senate representation, and not before time.

It is high time the ACT was treated fairly and represented accurately.

Having two more Senators for the ACT would guarantee the ACT is no longer taken for granted, give greater strength to Territory Rights and ensure the direct needs of Canberrans are looked after.

Since the ACT has only ever had two Senators, the major parties have had a stranglehold over its Senators, and have taken the ACT for granted. The Government once again proved this complacency in the 2022 budget, when the ACT was only apportioned a mere 0.3% of Federal Infrastructure funding. Doubling the ACT Senators would lead to more diverse representation, forcing the major parties to take the ACT seriously.

As it stands, we are underfunded and overridden. This is not representative democracy.

One issue increased representation would certainly address is the alarming ACT housing crisis. House prices are skyrocketing, with the median house price rising by 20% in the past year. Rent is becoming increasingly unaffordable, and there is inadequate social housing. With four senators acting in the interests of the ACT, we will see movement on issues key to Canberrans.

Other areas having more direct representation would address, include ACT health & education, protecting our national institutions (including the ABC) and bolstering our public service.

Increasing our representation would also embolden Territory Rights, allowing the ACT to greater stand up against attempts from the Federal Government to override the democratic wishes of Canberrans.

No matter your political views, all Canberrans would agree that it is inappropriate for the Federal Government to override Territory Legislation. Australians should have the same democratic rights whether they live in Gungahlin or in Queanbeyan.

For too long the ACT has been underrepresented and misrepresented. A greater amount and diversity of representation is a necessary change for the ACT, and no less than we deserve.

Therefore, gaining two more Senators for the ACT is a sensible and just move. With draft legislation already prepared, I will be able to put to Parliament the moment I am elected to the Senate.