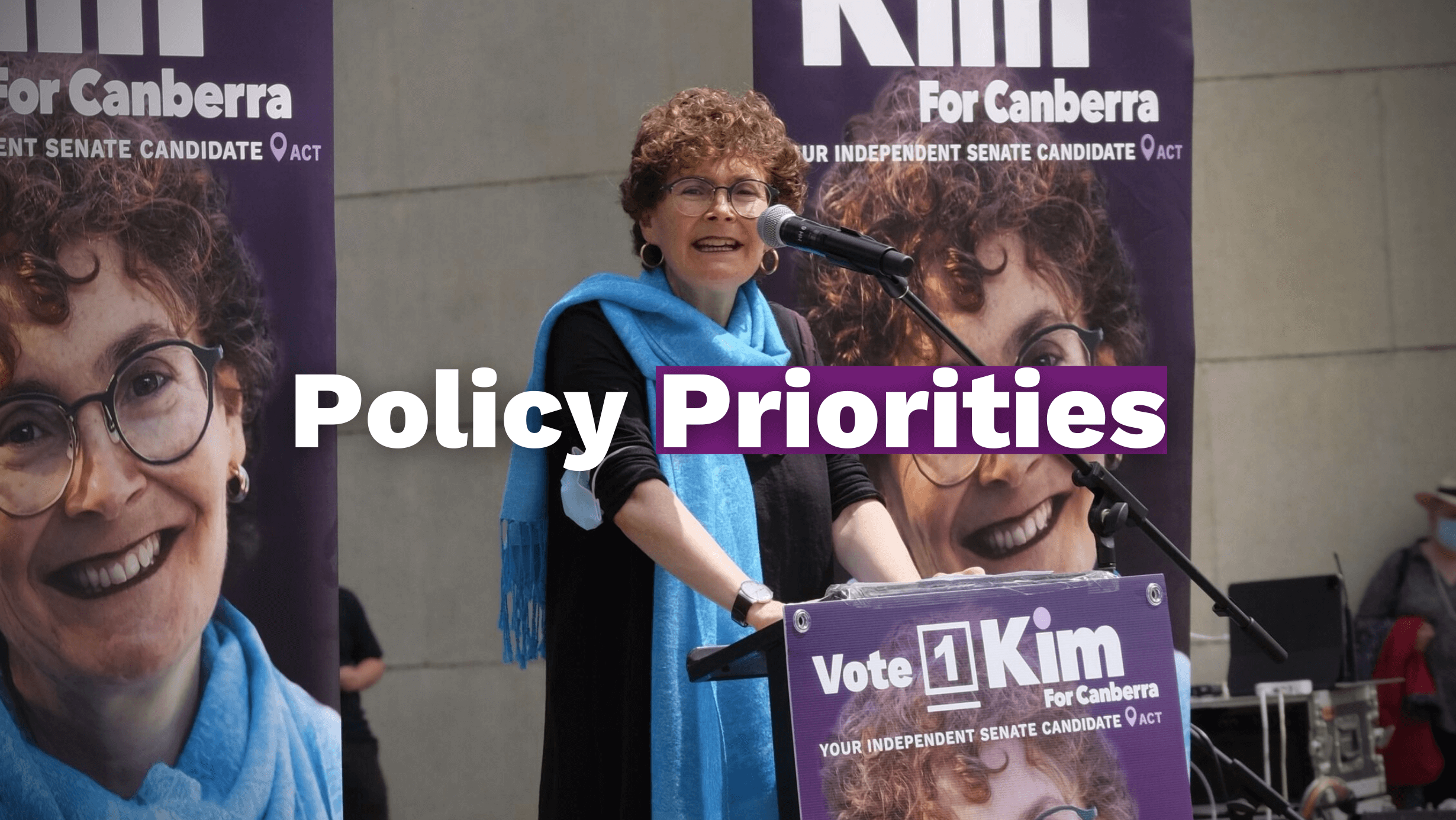 As an Independent Candidate, I will be community engaged, non-partisan, principled and policy-driven. This means I will rely on evidence, the community and my values to guide me across all policy areas, but I am also committed to achieving meaningful change in key areas.

Accountability and transparency are foundational to our liberal democracy. Without integrity, our Parliament has no chance of achieving progress on any of the pressing issues of our time. The erosion of accountability measures under successive governments has left our Parliament open to corruption.

Read more about my Integrity Agenda

Read my opinion piece in the Canberra Times on Integrity

The people of Canberra want climate action. We are amongst the most climate committed people in Australia. Climate is our top priority for the 2022 Federal election.

The 2019-20 Black summer bushfires were no aberration. The 2022 east coast floods were no aberration. This is climate change at work: destructive, lethal, unsustainably costly. The people of Canberra know Australia is in the frontline of climate change. We know Australia is warming faster than the rest of the world. We know our Pacific neighbours are already threatened by the oceans rising around them.

Australia has been stuck in policy paralysis on climate for decades. We need a circuit breaker – a way of taking this issue out of the deadlocked Parliament, so we can negotiate and reach consensus in a non-adversarial environment. This requires stepping the Climate debate outside of Parliament, engaging the community who are so desperate to get moving.

That is why I am proposing a Climate Compact, to break the decades-long partisan deadlock that has paralysed Australia’s response to catastrophic global warming. The compact encompasses an agreed strategy with roles and responsibilities identified for all stakeholders. I see the Joint Principles developed by the Australian Climate Roundtable, as guiding the negotiation of such a compact.

The objective of the Compact would be to convene stakeholders in a unifying process to negotiate a national strategy for delivering Australia’s fair contribution to holding global warming at 1.5℃. The strategy would be directed, at minimum, to achieving a 50% reduction on 2005 emissions by 2030, with every effort to achieve well above this within the technical and economic bounds of viability.

The climate emergency before us demands that we act now and act fast. The Compact must resolve foundational issues in the current calendar year, so that funding and consequential legislation can be enacted in the May 2023 Budget context. Other issues may take longer to resolve, but they must be settled no later than 2023.

It is key that all sectors of the community are represented in the Compact negotiations, ensuring that no one is left behind in the transition to the renewable economy.

Read more about the my proposal for a Climate Compact.

Read my opinion piece in the Canberra Times on the Climate Compact.

We need urgent and immediate action to ensure women’s safety when so many women are dying at the hands of their partners and so many women are being assaulted and harassed in the workplace. That is why I have backed calls for proper funding of specialist sexual, domestic and family violence services and better legal and institutional responses for victims.

But the issue of women’s safety is a deeply cultural and social problem that is a consequence of the way society perceives gender roles and norms.

To ensure everyone is safe and able to prosper regardless of their gender we must find structural solutions.

This is a problem that goes to the core of the functioning of our society.

We need structural solutions that will help shift the preconceptions we have about gender roles in society. If we address the gross inequalities across society we will see a safer society that benefits all.

That's why I am calling for a wide-ranging overhaul of Federal Government policies and spending to deliver gender equality and build safer environments for women at home and at work.

The urgent need to improve the status and security of women demands a coordinated strategy to tackle the issues in parenting support, early childhood education and workplace culture.

I pledge to press immediately as an Independent Senator for a package of reforms including:

- incentives to expand participation of men in occupations such as nursing, teaching and caring and to encourage women into male-dominated jobs and leadership in all workplaces;

- funding to rebuild the Office for Women and empower it to lead change; and

- urgent steps to implement all 28 recommendations of the Jenkins inquiry to end the toxic and dangerous workplace culture at Parliament House.

The Government needs to prioritise a comprehensive strategy to promote and resource gender equality in homes and workplaces – and ensure children grew up in an environment that is respectful of women and their rights.

The threat to women's safety is everywhere – in our workplaces, our homes and in our Parliament.

We desperately need to work towards and fund an equal and just society – starting with the care and education of children. Sharing parental roles is essential to instil values of equality and remove prescriptive gender roles.

Women's safety is directly related to gender equity; without one we cannot have the other. Supporting women at home and at work will improve the lives of all Australians and this must be a priority of Government.

I first proposed in late 2020 the inquiry into the culture at Parliament House led by Sex Discrimination Commissioner Kate Jenkins & I have been working for more than 25 years as a lawyer, university teacher and advisor to both sides of politics to achieve gender equity.

Read the article in the Canberra Times

Read my opinion piece in the Canberra Times about the need to change Parliament and societal culture to improve women's safety.

Standing Up for Canberra

The voices of the people are at the epicentre of our democracy, and the major parties over time have increasingly muffled and muted this voice. I want to directly represent Canberra in the Senate, so that politics can once again be a collaborative process. By having an Independent in the Senate, we can bring Canberrans voices directly into Parliament — not requiring approval by the major parties.

I want ensure that Canberrans’ needs, not the parties’ needs, are put first - something current ACT Senators cannot guarantee.

As a way of achieving meaningful and enduring change for the ACT, I am ready to table in Parliament draft legislation to push ACT Senate representation from two Senators to four. The draft legislation exemplifies my intent and ability to create immediate and substantial change for the ACT in the Senate. With the legislation already drafted, it can be enacted swiftly with the benefits felt immediately. Having two more Senators for the ACT would guarantee the ACT is no longer taken for granted, give greater strength to Territory Rights and ensure the direct needs of Canberrans are looked after.

Read More About My Proposal to Increase ACT Senate Representation

A First Nations Voice to Parliament

The Uluru Statement from the Heart represents the best form of ‘Active Citizenship’, engaging with First Nations communities all around Australia. Our Constitution is out of date and needs to be updated to recognise and reflect the crucial voices of First Australians. We are all invited to walk with Aboriginal and Torres Strait Islander Australians in a movement of the Australian people for a better future.

As a Senator for the ACT I will advocate for enshrining into the Constitution a First Nations Voice to Parliament and support a Makarrata Commission to supervise a process of agreement-making between governments and First Nations and truth-telling about our history. I will also listen to, platform & work alongside First Nations Australians and organisations including Winnunga Namitjyaha to support the local Indigenous communities in the ACT.

We all benefit from living in a thriving multicultural community, drawing on the rich cultures from around the globe. We must welcome those seeking refuge from places of distress, it is both a moral and legal responsibility. We are signatories to the Refugee Convention and should be model international citizens. There of course must be regulation through our borders, but the current policy of exclusion over inclusion and indefinite detention and inhuman processing times is a blight on our humanity and on the principles of a liberal democracy.

As a Senator for the ACT I will work towards revisiting our regulation of refugee processing and resettlement to ensure orderly regulation and repurposing the funds allocated to detention presently to positive steps towards resettlement with community support.

Read my work in the UTS Law Review advocating a more humane refugee policy - Looking for the 'Heart' of the National Political Community: Regulating Membership in Australia.

These last 2 years have been an unimaginable disruption and dislocation to everyone's lives around the world. Between lockdowns, closed borders and illness, the economic impacts have been severe. Cities around Australia have been faced with so many small businesses permanently closing. In this post-Covid period of covid normality, we have a responsibility to make sure everyone is looked after in the economic recovery. This requires sophistication, compassion and nuance, things that I want to bring back into the culture of Parliament.

In a society where we look out for all, one of the Non-negotiables is the right to adequate housing. Over the last 2 years, the ACT median house price has risen over 20%. Low supply and high demand for housing in the ACT has led to a housing crisis. Access to home ownership is becoming unrealistic, access to affordable rent more and more scarce, and there is insufficient social housing to accommodate those in need in the ACT.

Addressing this crisis must be our priority for infrastructure.

As a Senator for the ACT I will work with the various stakeholders and draw on the expert work already underway in this area to ensure addressing this housing crisis is a key priority of the 47th Parliament.