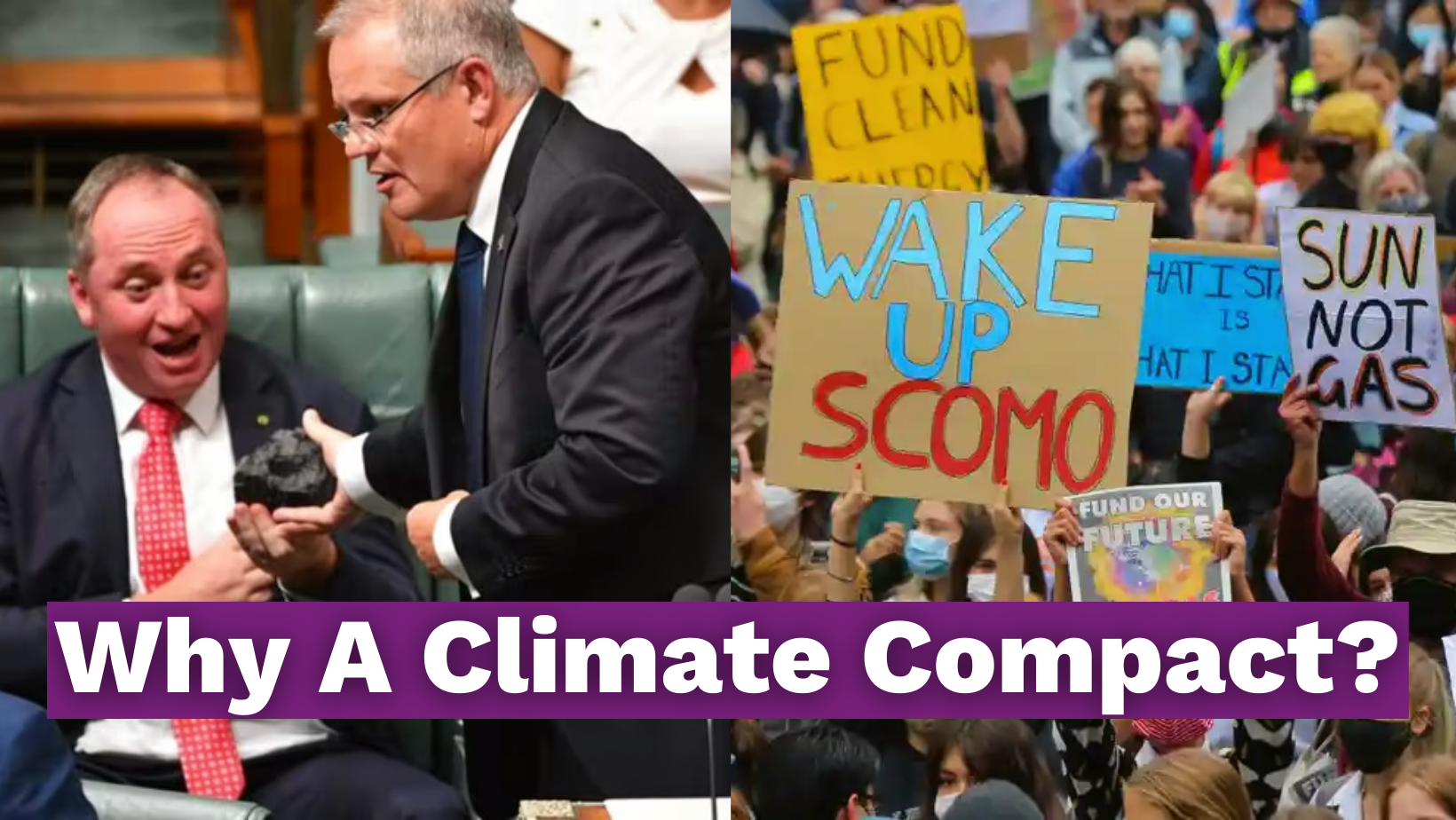 Why A Climate Compact?

The Coalition’s commitment to reduce emissions by 26-28% on 2005 levels by 2030, with a projected actual outcome of up to 35%, is far short of a fair contribution to the Paris Agreement goals of limiting global warming to well below 2ºC and pursuing efforts towards 1.5°C.  The Government shows no urgency on domestic decarbonisation and is committed to further expansion of coal and gas exports.

Labor’s commitment to reduce emissions by 43% is closer to supporting the Paris Agreement but still falls well short of Australia’s fair share as an advanced industrial economy with effectively infinite potential in renewable energy.  Labor would move faster than the Coalition in decarbonising the domestic economy but holds back from driving this with the urgency required.  Labor meanwhile remains silent on the role of coal and gas in both the domestic and export economies.

The Greens’ target of 75% by 2030 leading to net zero by 2035 is highly ambitious for what can be achieved in just 8 years.  The Greens would urgently decarbonise the domestic and export economies alike.  Their pathway to achieving these goals, absent national consensus, is not clear.

The irreconcilable positions of the parties reflect the deep polarisation of climate within Australian politics.  No bipartisan approach is in prospect and appears more remote than ever.

Against this, the four most recent climate polls – Lowy, ACF, Guardian and Australia Institute – all reflect majority support for decisive climate action.

This same sentiment is evident in the peak business councils and NFF, which have been working with the ACTU, welfare and environmental groups under the Australian Climate Roundtable to develop Joint Principles for Climate Policy. The Roundtable, in its Statement of 8 November 2021, advocates for Australia to pursue ‘the highest ambition’ in achieving emissions reductions and notes that: ‘Closed processes focused on Parliamentarians will be much less robust and effective than open processes that draw on the breadth of experience, expertise and perspective stakeholders have to offer.’

The shared concerns of business, unions and environmentalists is underscored by BCA, ACTU, WWF and ACF having jointly commissioned a report by Accenture on Australia’s future opportunities in the post-carbon economy. The BCA itself commissioned Deloitte AccessEconomics to advise on sweeping policy reforms to usher Australia into the post-carbon economy, and to model the economic benefits of such reforms.  Deloitte AccessEconomics has separately modelled the devastating economic costs to Australia of unabated global warming against the gains of limiting warming to 1.5°C. Professor Tom Kompas has estimated the economic costs to Australia of not meeting the Paris targets could, by 2050, be around 20 times the costs of meeting those targets.  A restive and proactive market has lost the patience to wait on Government, highlighted startlingly in February by Origin Energy's Eraring decision and the Mike Cannon-Brookes/Brookfield bid for AGL.

Clearly the political process does not reflect the popular mood to act decisively and urgently to shoulder Australia’s burden in arresting global warming. Nor does the political process reflect the prevailing aspiration of business, investors, farmers, unions, the welfare sector and environmentalists to avert the devastating economic costs of unabated warming and to ride the economic growth that will lie in the post-carbon economy.

In these circumstances, the climate agenda may be better stepped out of the Parliament and into the negotiating room where the stakeholders can directly settle a way forward. Stakeholders would include representatives of the broader community as well as those of the Australian Climate Roundtable. The process would still be challenging, but if bound by an agreed emissions reduction target (or range of targets), and mediated towards consensus, it may cut through to an actionable strategy.  Government itself is a critical stakeholder and would need to convene and facilitate the negotiations. The negotiations would be mediated, however, by an independent third party, supported by a suitably resourced secretariat backed by independent research and modelling and engaging, as appropriate, the resources of the Climate Change Authority.  The purpose would be to mediate a settlement which does not fall capture to political proxies. Once settled, the agreed strategy would go to Parliament for enactment of consequential legislation and funding.

The concept proposed is one of a ‘climate compact’ – an agreed strategy with roles and responsibilities identified for all stakeholders. The Joint Principles developed by the Australian Climate Roundtable would serve well in guiding the negotiation of such a compact (the compact is not, however, a proposal of the Climate Roundtable). The Compact would need to negotiate the highest possible emissions target for 2030. The minimum such target should be 50% on 2005 emissions levels, and there is good reason to believe Australia can cut much deeper than this by 2030. The urgency required in achieving deep reductions in emissions by 2030 demands that the compact resolve at least foundational issues in calendar 2022 so that consequential policy and funding is provisioned in the 2023-24 Budget context.  The range and complexity of issues to be addressed may require extension of negotiations into following years, but the overriding discipline must be to secure agreed outcomes for deep and urgent emissions reductions consistent with the Paris Agreement goals.

In quite different circumstances, the Prices and Incomes Accord of 1983 demonstrated the power of negotiated settlements in opening the way to sweeping economic reform.  The analogy (although from different times and tackling different problems) reminds us of the potential that can be unleashed when stakeholders are engaged directly in the negotiation of wide-reaching economic change.

A climate compact would offer the platform to prepare properly for our post-carbon future. We have the resources – intellectual and natural – to reduce our emissions well beyond the targets of the two major parties. We have the potential to prosper in a post-carbon global economy without reliance on fossil fuels.  And we have the responsibility – to our own children and to the global community – to help avert the pending disaster of unrestrained global warming. This must be a unifying and constructive task, and one unleashing the creative potential of the nation. It must be convened and owned by the incoming Government. It must be driven with urgency and outcomes in equal measure.